I am an Associate Professor of Political Science at California State University, San Bernardino specializing in comparative politics and international political economy with a regional focus on Latin America. My research explores two central topics within comparative politics and political economy: the politics of social policy under globalization and the role of legislatures in shaping major economic reforms.

My book, entitled Human Capital vs. Basic Income: Ideology and Models of Cash Transfer Programs in Latin America (University of Michigan Press), studies how presidential ideology influences the adoption and design of social policy in that region. Combining quantitative analyses covering the entire region and case studies on Brazil, Argentina, Bolivia, and Costa Rica based largely on field research, I examine the relationship between two of the most significant transformations in Latin American politics during the 2000s: the widespread election of left-leaning presidents and the diffusion of conditional cash transfer (CCT) programs. Described as the most important innovation in social policy of the last fifteen years, CCTs relieve poverty by awarding families regular stipends conditional on their children attending school.

Before pursuing graduate studies, I worked for five years as a politics and business reporter in my native San José, Costa Rica. 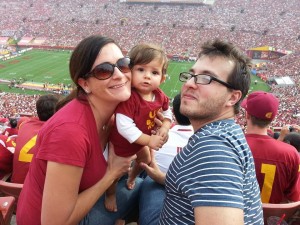 My family and I at a USC football game at the Los Angeles Coliseum.